How to Prevent Video Conference Fatigue 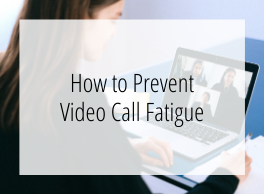 Anyone who’s been forced to use video-conferencing tools regularly in recent months will be familiar with their energy-zapping side effects, a term that’s now been colloquialized as ‘Zoom fatigue’ – likely much to the dismay of Zoom.

Now, there is scientific backing behind this phenomenon. Researchers from Stanford University have released the first-ever peer-reviewed study of the psychological effects of video meeting fatigue. In the paper, published in the journal Technology, Mind and Behavior, researcher Jeremy Bailenson identifies four core causes of videoconferencing exhaustion, as well as methods for countering its ill effects.

Video chats are inherently unnatural. Both the amount of eye contact we engage in during video chats, as well as the size of faces on screens, is not something we would experience in normal face-to-face meetings, says Bailenson.

In a normal meeting, people will move between looking at the speaker, taking notes, or looking elsewhere in the room. Whereas in a Zoom chat, everyone is constantly staring into the screen, dramatically increasing eye contact.

This is not something we are used to, Bailenson explains: “Social anxiety of public speaking is one of the biggest phobias that exist in our population. When you’re standing up there and everybody’s staring at you, that’s a stressful experience.”

Seeing a bunch of floating heads so close up is also disconcerting, as it tricks our brain into thinking we’re experiencing an intense situation – the only time someone’s face would be so close to ours in a real-life setting, Bailenson explains.

“What’s happening, in effect, when you’re using Zoom for many, many hours is you’re in this hyper-aroused state.”

Solution: Take Zoom out of full-screen mode or reduce the size of the app windows to make faces appear smaller on-screen, and sit further away from the screen.

Seeing your own face all the time is exhausting

There’s a big difference between glancing in the mirror a few times a day and having one held up to your face as you talk to other people.

That’s essentially what’s happening when we take part in video calls, and studies have shown that people are more critical of themselves when they see their own reflection.

No wonder, then, that seeing ourselves on video chats multiple times a day is so exhausting. “It’s taxing on us. It’s stressful. And there’s lots of research showing that there are negative emotional consequences to seeing yourself in a mirror,” says Bailenson.

Solution: Hide yourself from view in the chat window.

Sitting still and talking is unnatural

Most meetings would probably take place sitting down, but having to frame ourselves within a very limited field of view restricts our ability to move around even further, and in ways that aren’t natural.

There’s also a scientific basis behind the notion that getting up and moving around can help get the neurons firing. “There’s a growing research now that says when people are moving, they’re performing better cognitively,” Bailenson says.

Solution: Creating more space between yourself and the camera. Get an external keyboard if you’re using a laptop, and think about the space you’re video-calling in. You can also turn off the camera if you want to move around a bit.

Cognitive load is at maximum

Non-verbal communication makes up a huge part of our face-to-face interactions, and is so inherent to our behavior that we don’t usually have to give it much thought.

When we’re speaking through video calls, we have to think a lot harder about how we can convey how we’re feeling, and also be more aware of how others might interpret what we say or do. This is massively taxing on our brains, which have to work overtime to send and receive nonverbal signals from others.

“You’ve got to make sure that your head is framed within the center of the video. If you want to show someone that you are agreeing with them, you have to do an exaggerated nod or put your thumbs up,” says Bailenson.

“That adds cognitive load as you’re using mental calories in order to communicate.”

Solution: This once again comes down to switching off the camera and giving yourself an audio-only break. Here, however, Bailenson suggests you actually turn your entire body away from the screen in order to escape “gestures that are perceptually realistic but socially meaningless.”